We need your help to complete our book.
Please donate.

This book,” Journeys of Transformation,” reminds us that if we value the ideals of justice, compassion and democracy, we need to be its guardians.

One by One, Inc. was created 50 years after the end of WWII to try to grapple with its fallout.  Due to the honesty and courage of a small group of people from both sides whose lives were deeply affected, a path was paved to assist not only those who suffered from the fallout of the Holocaust and the Nazi Regime, but for those in other parts of the world who wish to transform their own legacies of war and genocide.

Chapter 1: We Were There (excerpt)

The following stories are from people who were adults during World War II some of whom served in the armed forces. One is a German man who was drafted into the SS, another is an American who served with Patton’s army and yet another is a Jewish woman who escaped Germany, joined the South African army and returned to Germany to serve with the Allied Forces.

During one of our dialogue groups Dr. Guenther H., a former member of the Hitler youth, told us that he had spent many years reflecting on the psychological conditions which made people feel attracted to the “Fuehrer”/Adoph Hitler.  He spoke about a basic feeling of fear which prevented people from developing a critical sense about went on in the society around them.

He told us a story that has remained with us since. When he was a boy he was abused by his parents — locked in the basement, beaten, scolded harshly, and was left feeling downtrodden and worthless. He told us that the handbook for mothers in Germany when he was young encouraged  “breaking the will of the child.”  He explained how this treatment of children in Germany created fertile ground for Hitler and fascism.

“You, see,” he said, “when Hitler told us that we Germans were the master race, I began to feel proud for the first time in my life and was drawn to follow him without question. He became the father I never had and so wanted and needed.”

The book he talked about was Johanna Haarer’s “The German mother and her first child,” first published in 1934. Ms. Haarer was a strong Nazi believer who gave instructions on how to raise children to be “dutiful.”

From these revelations, we began to understand why so many Germans joined with Hitler and how we may take for granted how important it is to raise children who can participate in the creation and maintenance of democratic life.

We now invite you to enter the world of living history through the eyes of the generation who were there. 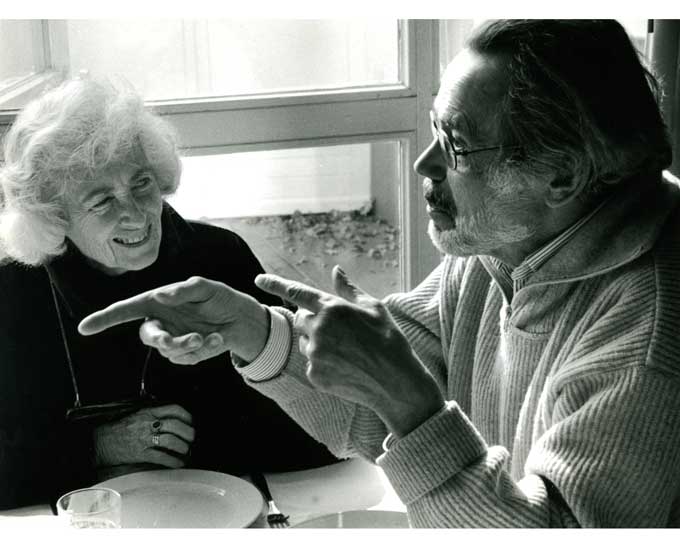 Chapter 2: The Next Generation Speaks

As far as history is concerned, the Second World War has been over for half a century. But for me, it began in the year 1989, the year I learned that I am the daughter of a war criminal and a sadistic mass murderer who, with his own hands, helped in the annihilation of the Jews. All my life I have avoided the topic of “The Third Reich,” but now I am in the thick of it, and I must search for a way I can live with it.

I still find it difficult to talk about the sadistic crimes committed during the war in connection with my father. But this sense of rage, shame, guilt, helplessness and impotence has filled me ever since I learned the truth. It has also given me the overpowering urge to discover as much of the past as possible, to read about it, to hear about it, to talk about it, to deal with the Third Reich, and to write everything down, so I can learn to endure these feelings.

The memory of my past is like a puzzle. Some people and some events I can very clearly see; others I have almost no memory of, especially of my father. All that remains with me from my childhood are impressions, feelings, both negative and positive. I simply cannot remember.

In 1944, Ana was twenty-three years old, and lived in a small town in Transylvania. She was beautiful, with blue eyes and dark hair framing her white skin. During the month of June, when fruit trees were in bloom and fragrant, Ana, her parents and one brother were taken at gunpoint to cattle trains — destination: Auschwitz.

After a three-day voyage without toilets, food, or water and locked in the cattle car with a woman who had lost her mind from the ordeal, they arrived in Auschwitz.

Following are excerpts from Ana’s diary:

The train entered a forest and the siren emitted a piercing sound which seemed interminable… Now we knew we were in Poland in a place called Auschwitz. As soon as the train stopped, German soldiers came to the doors and yelled, “Out, dirty swine!”

…Then they separated us into men and women, the ones who were young and strong and the old, sick and children. None of our prayers helped us, people were separated from those they loved and it was a pitiful sight… My mother was only fifty years old but she wore a shawl which made her seem older. She asked a German soldier to let her stay with me, but he yelled at her to move and pushed her so hard she almost fell… My mother walked away looking back at me as long as she could with tears in her eyes. That was the last time I saw her.”

To this day, Ana is still haunted by her mother’s eyes.

Ana is my mother. After liberation she returned home, and in the rubble of her former life there was not a single picture of her mother. My mother has lived continually with the horrors of Auschwitz, for it seems she cannot unlearn what she knows about human nature. She has spent most of her life caring more about those who died than about her loved ones, who are alive. I was born shortly after she returned from deportation, and I am named after my grandmother.

Unfortunately, Auschwitz didn’t just happen to my mother; it also happened to my brother and me, and it has now been passed on to my niece. I grew up with concentration camp nightmares; torn between a mother, for whom joy was too much stimulation and had to be squelched, and the rest of the world for whom the vast reservoir of my pain was too discomforting…

One by One we seek out the humanity in each other as we listen with compassion to one another’s stories of pain, guilt, anguish, loss and fear. As the stories resound within us, the burdens are lightened and we begin to transform the impact of our legacies, offering hope to future generations.

Chapter 3: After the Dialogues

One by One’s participants have been multi-generational consisting of Holocaust survivors and their descendants; Nazi perpetrators, bystanders, resisters and their descendants; as well as those who served in the armed forces of the United States and Germany during this period in history. Members of these groups have inspired many in Europe and in the USA by bearing witness to their experiences in schools, synagogues, churches and universities; by creating works of art and by standing up for social justice. One by One has also impacted people from other countries who have suffered from war and genocide. For example:

From Joseph Sebarenzi, former Speaker of the Parliament of Rwanda and a victim of the genocide

“I first came to know One by One in the summer of 2001 at the School for International Training. …After listening to their stories and efforts…, I thought to myself, if these people can do it, then my people, the people of Rwanda, can do it too. If these people, as descendents of those caught up on both sides of the Holocaust, can undertake voluntarily without a push from their governments, the process of grappling with such vicious hatred, then my fellow countrymen, the Hutu and Tutsi communities, can surely benefit from this model of transformative dialogue. This first encounter with One by One reinforced my growing commitment…”

From Paula Green Director, Project Diacom, after having One by One members speak with a group of educators in Bosnia in 2001

“We learned the value of multi-partiality in dialogue, remembering that there is no life without suffering, especially in war and that the journey to healing may begin with a single phrase, “yes, this tragedy happened, I acknowledge your experience, I accept your truth…Muslims, Serbs, Jews and Germans…weave a new story from their intertwined histories, this one committed to honesty, introspection, civic responsibility and compassion.”

From a human rights worker, survivor of the Mayan genocide:

I am Maya Kiche from Guatemala. I had an idyllic childhood, knowing life through contact with nature, my family and my community. This ended when I was 13, as I began to witness the genocide against the Mayan people during the armed conflict in Guatemala (1960-1996). When I was 16, my uncle and his eldest son were assassinated, inside their own home; and his youngest son, and his son in low, were kidnapped and never seen again. For over a year I locked myself in my house to “save my life,” fearing the same would happen to me. My mind, my heart and my spirit were filled with hatred and vengeance against the perpetrators.
Today, I am in my healing process, drawing out from my being that hatred that poisoned my soul. In this process I need to be heard. In One by One I have found a space where people hear my testimony and understand my pain. One by One is teaching me how to release this hatred and discover how to promote my healing process.

“We must, if we are to call ourselves human, grapple with the myriad lessons that war and genocide calls upon us to learn…Perhaps we, the descendants of the Holocaust and the Nazi Regime, are the students as well as the teachers whose responsibility it is to transform ourselves and the world, one by one.”
RG

Your donation will be made through our fundraising vehicle, "Network for Good"